Here is a report from Diane Leafe Christian, sent to me by email, to be shared by all interested in sociocracy:

What I learned about Sociocracy for intentional communities at GEN Conference

This report, the first email of three, is for friends and colleagues who teach Sociocracy, and especially those who teach it to intentional communities.

I want to tell you, first, what new things I learned at the five-day Global Ecovillage Network (GEN) conference at Findhorn Community in Scotland, July 4-10.

And in the second email, most of what I learned as a consultant along with Robert Gilman  for the "Working Group for Change" at the Findhorn Community the following week, and from the small informal consultations I did for various individual groups within the wider Findhorn Community.

And in the third email, a bit more of what I learned doing informal consultations for individual groups at Findhorn, and what I learned specifically from a new friend from Austria who was visiting Findhorn at the time, Markus Spitzer, a Sociocracy trainer with the Austrian Sociocracy Center.

The July 4-10 GEN Conference was the 20th anniversary celebration of GEN International. This is the overall network comprised of five GEN Regions and NextGEN, the international ecovillage youth organization. There were 400 or so people from all over Europe, as that is the closest GEN region, and also the Middle East, Africa, Lain America, a few people from Asia and Australia & New Zealand, and some Americans too, and at least one Canadian (from La Cité Écologique, Francine.) Some of the conference participants in Findhorn's Universal Hall.

I was in a GEN task group that met five times during the conference to consider issues of GEN's potential reorganization, both in terms of structure and content. I did a 45-minute overview about Sociocracy for the group one morning.

Also, after a 10-minute presentation on ecovillages for the Findhorn video streaming service (later to be on youtube). At that talk I met Ilan Aron from Tasman Ecovillage in Australia, Gina. At Tasman Ecovilage they're learning Sociocracy and I think already using some of it, with Gina Price from Perth as their trainer. At the start of my 10-minute presentation for the GEN conference in the Universal Hall.

There already was an interest in Sociocracy in some parts of GEN.

The GEN-Europe group had elected five new Council members by the Sociocracy elections process the day before the conference started.

And C.A.S.A., the Latin American GEN region, is now using Sociocracy, which I think is in some part due to my teaching it in April, 2013 for Aldeafeliz Ecovillage in Colombia and representatives of CASA Colombia, their national GEN organization, there. I met many Latin American CASA people the first day of the conference, some whom I'd originally met when CASA was formed at another ecovillage in Colombia in 2012, and some from the Aldeafeliz workshop.

I was already talking with my friend Gio Ciarlo about doing a Sociocracy workshop for Huehuecoyotl Ecovillage in Central Mexico in November. However, when I met my CASA friends they said they wanted me to teach it for CASA Mexico too on the same visit, so I will. CASA Mexico is the national GEN organization of that country. The day after the GEN conference some new GEN Council members told me that five of them wanted to implement Sociocracy for GEN International, to replace their current governance structure (which is rather loose) and their current decision making method, which is a loose form of consensus. And they wanted me to teach it. The whole Council (5 or maybe 7 more people, I think), need to approve the proposal.

If the proposal passes (via their current decision process - consensus), I'll do an online training for the GEN Council members (board of directors), their steering group (like department heads), and their small international staff, in an online 12-week course starting in August. When I told John Buck he advised me to talk with he and Jerry Koch-Gozalez from TSCG, as they and TSCG already have a lot of experience now teaching Sociocracy online. I've taught Sociocracy online before, but will absolutely learn from John and Jerry for this proposed course.

I also met two European Sociocracy trainer pals during the conference, Frands Frydendal from Denmark and Fredjan Twight from Bergen Ecovillage in The Netherlands. Frands teaches in Denmark and also now Portugal. Fredjan has taught in The Netherlands and other places in Europe too, including Italy.

Frands and I hung out several times to visit and share what we've learned since the last time we met, which was when he, and Fredjan and another Sociocracy trainer friend, James Priest, were at my workshop in 2013 at Ängsbacka Ecovillage in Sweden. 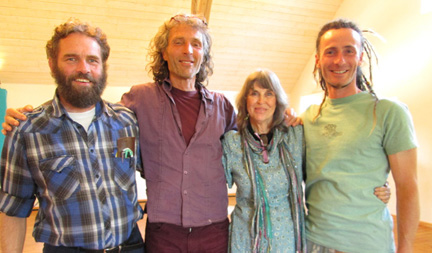 Frands, Fredjan, me, and James Priest after the Ängsbacka workshop in Sweden in 2013.

Frands is one of the three Sociocracy trainers I know of who has also studied Holacracy (I'm one and Gina in Australia is another -- and both Frands and Gina have taken the full-on four-day training with Brian Robertson).

Frands told me how he used some simulation exercises, an idea he got from Brian's Holacracy training, when he next taught Sociocracy in Portugal. It sounded very cool. Frands also said something very useful to me, which is that circles being self-organizing and semi-autonomous, means that while they organize themselves, they are only "semi" autonomous beucase they are created by and given their domain and aims by the General Circle. I knew this but it was helpful to learn this way of putting it. Everytime I visit with a Sociocracy trainer I learn something new and useful.

I also got to visit with Fredjan. When he and I talked Fredjan told me about two exercises he's done in recent workshops that help people understand the principle of feedback loops. One was the "lighthouse game." In this game someone becomes "it" and briefly leaves the room, while others stand in various places around the room. One serves as the lighthouse and others serve as buoys in the water. The person who was "it" returns, and with eyes closed has to walk through the room to find the lighthouse. The lighthouse person makes periodic high "beep" sounds so the person can move toward it from the sense of sound. Yet many buoy-people are in the way, and they make low "beee-ohhh" sounds like a foghorn, which means "Stop, go around, not this way." So the person slowly navigates through the room to avoid all the buoys and finally arrive at the lighthouse, navigating only by the feedback of the sounds.

I had been scheduled to do a brief overview of the elections process for GEN-Europe the previous Saturday for their Council elections, and to then facilitate the process for them. But I got sick and Fredjan did it instead. thank goodness.

He asked if I'd heard anything about the GEN-Europe elections, and I had, which was that they successfully used the process to elect five new Council members.

He was also interested in hearing if there were any suggestions for improvement. I told him I'd heard that two Council members were proposed and consented to who, it turned out when they were asked last for their consent, couldn't do it or didn't want to do it. So some GEN-Europe people had felt frustrated because of the time it took to do that, only to find out the consented-to candidates didn't want the role.

Fredjan and I talked about the pros and cons of asking the proposed candidate for their consent last. This is the usual way it's done, but this experience -- doing an elections process one by one with 30 people in the room -- made me wonder if in some circumstances it might be better just to ask the candidates right way if they'd be up for it. Food for thought . . .

We also talked about the process of making clear at the beginning of the elections process not only the term length but also to list in a visual way and give consent to the tasks of the role, the requirements for the candidate that would be necessary to do those tasks, and also desired characteristics for the role (that is, optional things rather than requirements.)

I had helped compile these lists for GEN-Europe online ahead of time with Robert Hall, the GEN-Europe president, and I would have brought it to the meeting. But when I got sick I didn't forward this information to Fredjan, and Robert Hall didn't bring it forth in the meeting either. Fredjan didn't bring it up either at the beginning meeting, but rather started the elections process. We talked about this, and I think it was more confirmation for both of us to always include this important part of the process.)

I told him about a story from from a forming cohousing community in another country that had had a half-day workshop in Sociocracy, including the elections process, which the trainer facilitated. But for some reason he didn't ask them to first agree on the tasks, requirements, or desired characteristics for the role. Unfortunatey someone objected to the proposed person because of  personal dislike rather than on anything regarding the tasks or requirements for the role. It created an awful conflict in the group right then, and my friends in the group tell me the fallout from the conflict continues to this day.

My last conversation about Sociocracy the GEN Conference was when Nicoletta, a movement therapist from Sieben Linden Ecovillage in Germany, described her and Fredjan's workshop a few months ago in The Netherlands.

She said she offered movement exercises in the workshop to add balance to the non-movement aspects of the workshop.

She said something like, "As you probably know, most intentional communities that learn Sociocracy in workshops don't like it or use it because it's too theoretical and mental for them."  She said her movement exercises counterbalanced all the theory and thus made it a really good workshop.

I was surprised to hear this because I don't think Sociocracy is theoretical and mental, and know it can be taught in visual ways and with and lots of exercises for practice.

I told Nicoletta I know intentional communities that have learned Sociocracy in workshops or study groups and now use it and like it very much, such as Pioneer Valley Cohousing in Massachusetts, Harts Mill Ecovillage in North Carolina, and Aldeafeliz Ecovillage in Colombia.

One of the founders at Aldeafeliz wrote an article that appeared in Communities magazine, "Sociocracy to the Rescue at Aldeafeliz Ecovillage." (I'll send a copy  if you're interested; just email if so.) 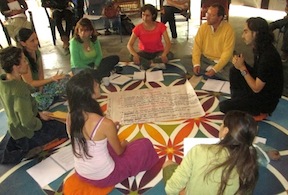 The next email will describe how some people in the Findhorn Community are now using some parts of Sociocracy or are interested in learning more. And what I learned about what has been helpful for the organizations that use it, and what has sometimes challenging for some, which seem have some misunderstandings of how to implement it. 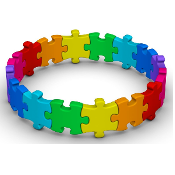